To fully understand pruning tomatoes, you need to know the three types of tomatoes. When pruning your tomatoes, first identify which kind of growth habit the plant has: determinate, indeterminate, or semi-determinate.

Pro-Tip: whenever you are pruning tomatoes or any plant, use sharp, clean pruners for the best results. Dull blades will damage plants.  Tired of dull blades on your pruners? Get high-quality pruners with blades you can sharpen like our Corona 1″ Pruners.

These tomatoes are sometimes called “pole” tomatoes. That is because they grow long vine-like stems and tend to need a structure to keep them up off the ground. These tomatoes will yield over a long period instead of all at once. Popular varieties are Yellow Pear and Green Zebra. We have seen these varieties get nine feet or taller with support on our farm. The benefit of growing this kind of tomato is that you have tomatoes all season long in small batches that are easy to handle. A potential negative is that they require a generous amount of staking if you want to keep them tidy.

For a patio grower, we recommend determinate tomatoes because they are better suited for pots. When pruning tomatoes of indeterminate varieties, you will want to remove the suckers to direct the energy into the fruits and discourage the plant from producing excessive new growth in lieu of ripening current tomatoes on the plant. This way of pruning tomatoes is best for varieties you grow using our low and lean Tomahook method. It allows you to maximize yield and minimize the space needed for the plant as you are constantly directing the energy flow into the tomatoes.

These tomatoes are a mix of determinate and indeterminate. They tend to be much more compact than an indeterminate variety of tomato but will yield over a long period. When pruning tomatoes that are semi-determinate varieties, you will want to remove suckers and prune for the shape and size needed to keep the plant neat and tidy. Still, you will be pruning much less than pole varieties like Green Zebra or Lucid Gem.

Keep in mind that this information is strange for Southern California growers because our mild climate allows for tomato production year-round in many places. When we speak about setting fruit all at once, it is the difference of a plant ripening one tomato at a time or, in the case of something like a San Marzano tomato, ripening handfuls of fruit all at once. Both an indeterminate or determinate tomato variety, in a mild climate, can yield for long periods.

Now that you know the various kinds of tomatoes, you can make better decisions about pruning tomatoes.

When growing indeterminate tomatoes, pruning is essential for maximized fruit production. An indeterminate tomato plant will grow copious amounts of foliage and very little fruit if not pruned in a way that tells them where to put their energy. For indeterminate tomatoes, it is important to cut off the suckers. The suckers are the stems that grow between the main stock and a branch. They grow right in the crotch of these two parts and will suck energy from the tomatoes setting above it if not trimmed away.

In the photo below, we show two types of pruning of suckers. One is simple pruning which is recommended in mild areas or coastal areas with more moisture. This pruning allows for better airflow and fewer disease pressures. In areas that get very hot, tomatoes can suffer from sun scald, and because of this, we recommend the Missouri pruning method, which allows for some foliage to be left to shade tomatoes. 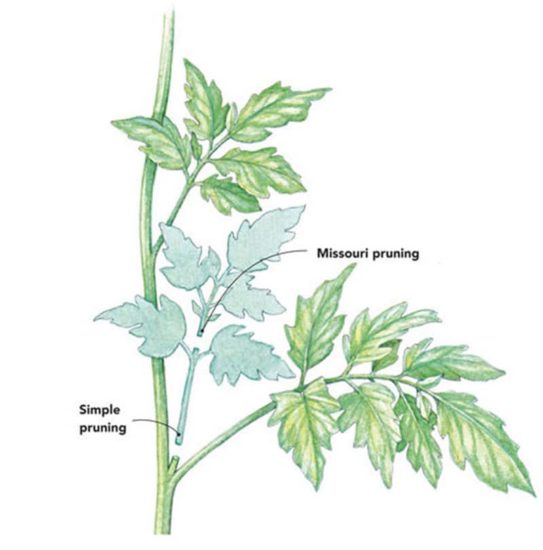 Why do you prune off suckers?

On indeterminate plants, the suckers grow new sets of shoots, flowers, and eventually tomatoes. However, the new growth will take vital energy away from the already formed flowers and future tomatoes. By curbing the plant’s innate desire to grow more foliage, you can ensure its energy goes into developing tomatoes.

On determinate tomatoes, this practice is not as essential but still advised. Why? Determinate tomatoes have a set number of tomatoes they will produce, and pruning has little influence on that. However, you still want to prune to minimize the pest issues common with tomatoes, like whiteflies. Increased airflow is vital for any healthy tomato plant.

Brijette Peña is the owner and founder of San Diego Seed Company. Her company focuses on providing the highest quality organic, heirloom, and rare seeds to small-scale growers in the Southwestern United States. The company produces, trials, and promotes local and regionally adapted organic seeds for the unique climates of Southern California and the American Southwest. Her company offers over 300 varieties of vegetables, herbs and flowers for the home gardener and small-scale farmer. Her farm hosts a three-day urban farming course with an emphasis on understanding the importance of regional seed systems and an introduction to seed saving.

Gifts for gardeners — that they will actually use — is back for the holidays! Our 2022 Holiday Gift Guide…

A Rap on Soil

A Rap on Soil By Mel Lions Gardeners have always understood the value of healthy, rich soil. They take great…

Have you ever tried planting tiny seeds only to find they had washed away when you watered them? Have you…

Our agricultural ancestors discovered long ago that when some crops were planted near others, each thrived more than the same…

Garlic is one of the EASIEST crops to grow in any space, even in small pots! These key tips will…

How to Grow Marigolds from Seeds